Burna Boy’s hit song “Ye” has been certified Gold by the Recording Industry Association of America (RIAA) three years after its release, making it the fastest Nigerian song to achieve this feat.

“Still Striving,” the self-styled African Giant captioned the achievement on Twitter. Bose Ogulu, his mother and manager, also reported the accomplishment on her Instagram page.

The number of albums and singles released across retail and other ancillary markets determines RIAA certification. A song or album that sells 500,000 copies (records, tapes, or compact discs etc.) is considered a gold record.

The sixth single from his third studio album, ‘Outside,’ was released on August 6, 2018. On Billboard’s Mainstream R&B/Hip-Hop and R&B/Hip-Hop Airplay charts, it reached number 26 and 31, respectively.

The song, a mid-tempo hit with a catch chorus, earned around 11 million streams over seven months across major US streaming platforms after its release. The official music video, which Burna says “essentially shows the unrelenting nature of Nigerians” currently sits at 137 million views on YouTube, making it one of his highest streamed songs on the platform.

Meghan, the Duchess of Sussex, is also publishing her first children’s book, which she claims is inspired by Prince Harry and their son, Archie.

Meanwhile, Will Smith is taking his health seriously and plans to record his fitness journey on YouTube. 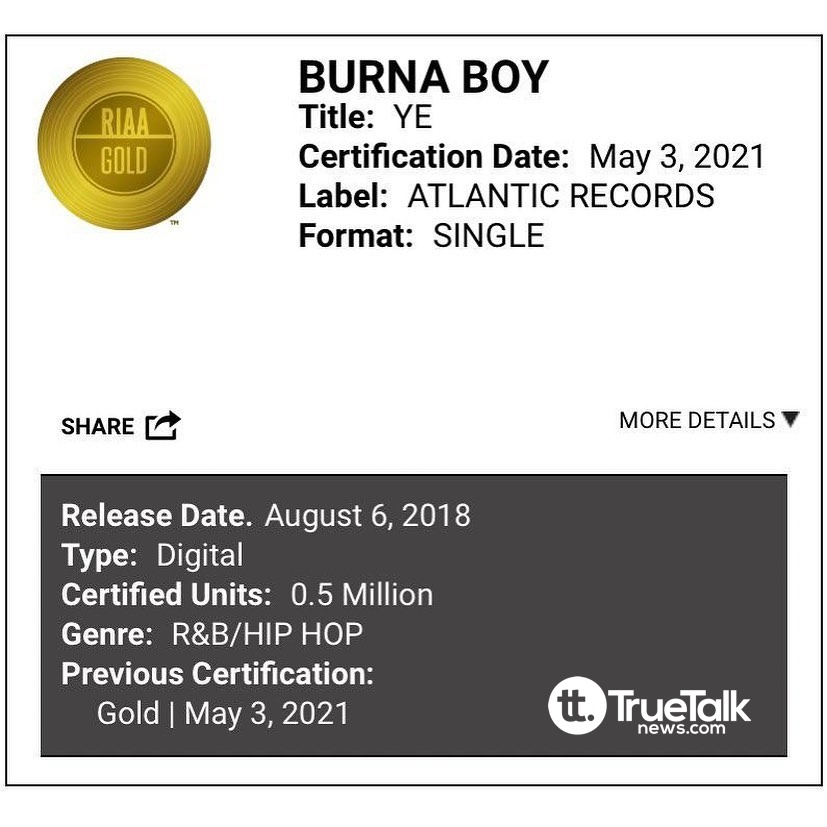 The album ‘YE’ by African Giant was certified gold in the United States in 2018.

ALSO READ: Davido, a famous Nigerian singer, reacted to Twitter’s use of his slang “E Choke” as an Emoji.